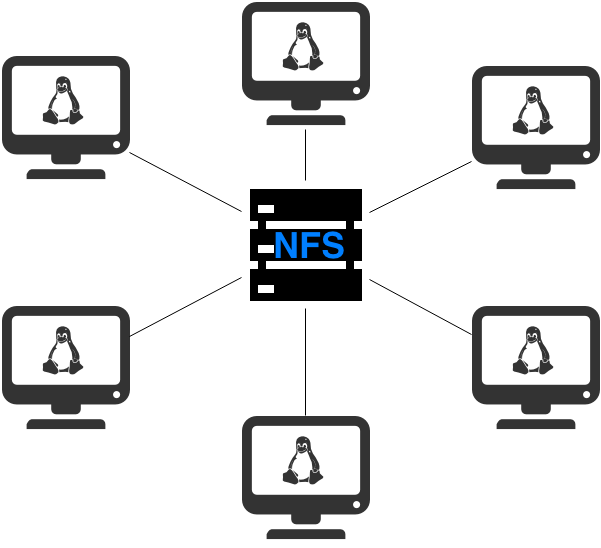 Filesystem caching is a great tool for improving performance, but it is important to balance performance with data safety. Caching over NFS involves caches at several different levels, so it is not immediately obvious which combination of options ensures a good compromise between performance and safety.

the NFS client has the async mount option, which caches writes in the client's RAM until certain conditions are met: delays sending application writes to the server until any of these events occur:

In other words, under normal circumstances, data written by an application may not immediately appear on the server that hosts the file.

If the sync option is specified on a mount point, any system call that writes data to files on that mount point causes that data to be flushed to the server before the system call returns control to user space. This provides greater data cache coherence among clients, but at a significant performance cost.

See nfs(5) for more details. In other words, when writing data to a file or set of files, rather than flush to the server on each write(2) call, the system waits until the file is closed or the application expliticly calls fsync(3) or another sync function. Since you're relying on the application correctly request its data to be synced, I was concerned about relying on this cache in a general circumstance, when potentially poorly-written applications could be never syncing their data. However, given that close(2) causes the data to be synced, this seems like a non-issue, and asking on the linux-nfs mailing list clarified in more detail how this works:

In NFSv3, the close() will cause the client to flush all data to stable storage. The client will also flush data to stable storage on a chmod, since that could potentially affect its ability to write back the data. It will not bother to do so for rename. An application should normally be able to rely on the data being safely on disk in both these situations provided that the server honours the NFS protocol (with a caveat that an ill-timed 'kill -9' could interrupt the process of flushing).

All metadata operations such as create, chmod, rename, etc. will cause the server to flush the file metadata to disk assuming that you set the (highly recommended) "sync" export option. If "sync" is set, the server will also honour COMMIT requests by flushing the data to stable storage.

If, OTOH, your server lists the "async" export option as being set, then COMMIT is considered a no-op, and it will not bother to explicitly flush metadata operations to stable storage. Performance will scream, but be prepared to lose data if that server crashes. This is all technically a violation of the NFS spec, however you have been given rope...

Therefore, using async on the client is safe and will provide a pretty significant performance boost.

It's also important to look at soft verses hard mounts. A soft mount will give up attempting to write to a server that is unavailable after a specific timeout and number of retries. In my experience, this hasn't worked well and I often end up with processes stuck in uninterruptable sleep blocking on an NFS mountpoint anyway. As per the manpage, hard is highly recommended to ensure data integrity:

NB: A so-called "soft" timeout can cause silent data corruption in certain cases. As such, use the soft option only when client responsiveness is more important than data integrity. Using NFS over TCP or increasing the value of the retrans option may mitigate some of the risks of using the soft option.

Note that the intr option allows you to interrupt a request waiting on a hard NFS mount by sending it the SIGKILL signal. However, on kernels newer than 2.6.25 this is provided by default, and the intr option is deprecated. You should still be aware of it though in case you are working with an older kernel.

Given my poor experience using soft (the timeouts don't seem to actually work) and the increased risk of data loss, hard seems like the most appropriate option to use. The common problem mentioned with using hard is if the server goes away (e.g hardware failure and it is down for an extended period of time), there used to be no way to unmount that mountpoint or let processes blocking on it complete. There are now a few ways to mitigate this:

If the above fails to work, you will probably have to reboot the client in order to clear the stuck mountpoint.

async This option allows the NFS server to violate the NFS protocol and reply to requests before any changes made by that request have been committed to stable storage (e.g. disc drive).

sync Reply to requests only after the changes have been committed to stable storage (see async above).

In conclusion, these options seem to provide a good balance of stability and performance when using NFS: