The iPad - My Thoughts 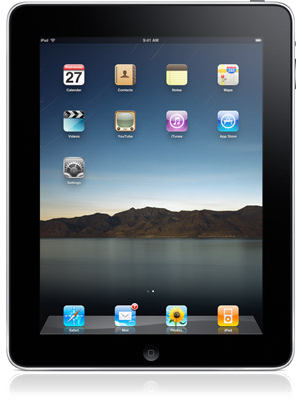 Finally it is here. There has been a lot of negative reactions to Apple's new iPad. Remember the reaction to the first iPod or the iPhone? Many of the complaints are things that can (and hopefully will) be addressed with software updates. This is a major new product which means they can't have absolutely everything implemented at its inception. Here's my perspective on the iPad and why I believe this new device from Apple will once again revolutionize an industry.

I believe this Gizmodo post hits the nail on the head. The idea that a tablet should run a desktop operating system is fundamentally flawed. Why? Because creating a tablet that simply runs a desktop OS will be at best be clunky and won't capture the market. If someone wants to use a desktop environment, they will buy a laptop or netbook. The way to really make this tablet successful is to change the whole computing paradigm. This means creating a new interface for this "computer" - something easier and more intuitive to use. In Computer Science we often talk about abstraction - it is really the only way you can understand the inner workings of computers. As you move up from the lowest hardware level to complex chips and eventually the software bridge, you must abstract away the details. Moreover, an operating system does just that - it abstracts away a lot of the tasks necessary to make a computer function and thus makes them usable and actually enjoyable. The Apple iPad takes this abstraction one step further.

The iPad differs in a number of good ways from a traditional desktop OS:

Problems - there are a few issues which Apple should resolve to make this product live up to its full potential:

So where does this leave us? What will the iPad mean for the computer industry? The reason Steve Jobs said that the iPad is "the most important thing I've ever done" is because this is the computer reinvented for the masses; computers 2.0. Average users can now use a computer that is more intuitive and lets them simply access what they want. This is why he made that statement - the iPad has the potential to completely change the world of computers forever. Most people aren't power computer users, so for them the iPad is finally a perfect fit for their computing needs. Laptops and desktops are not going to disappear, they will still be prominent when more power is required and favored by power users, but this device and its successors will create a new, better computer experience for the average users.

What about print media? This is another reason why the iPad has so much potential for success. Yes, the Kindle is a good ebook reader. However, it does not have a color display and it does not display pictures and video and really interactive content like the iPad can. In order for newspapers and print media to see a resurgence, they must reinvent themselves with an updated format for the 21st century. Thia means new content and a more convenient format. What better way to do this than through the iPad. I also think the iPad will be revolutionary in education - imagine carrying just the iPad which has all your textbooks on it! And this isn't like carrying a laptop with PDFs - these textbooks will feel a lot like real textbooks in that you can flip through the pages.

The future for the iPad is bright - and I am really excited to see where this takes the computer industry. Granted, you won't see gcc on iPads around the world anytime soon, but for casual computer user, which makes up a large portion of the consumers, the iPad is a perfect fit.