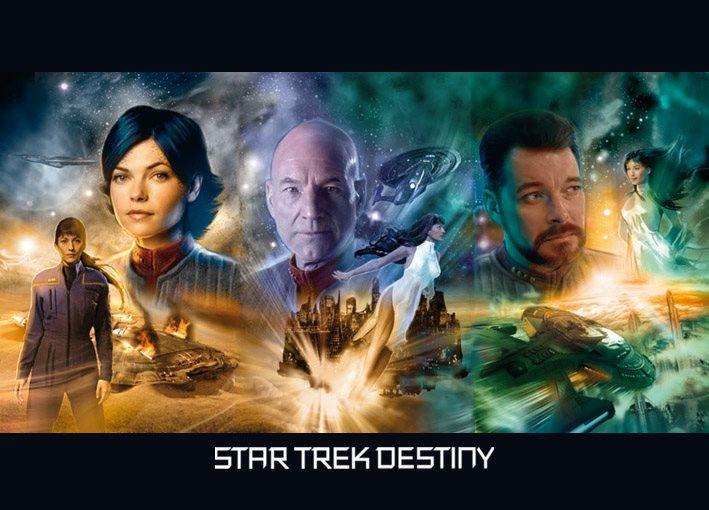 I recently finished this 3-part Star Trek series by David Mack, which converges stories from Star Trek The Next Generation, DS9, Voyager, and Enterprise. Macks' story blends these timelines together naturally, truly fabricating the continuity of the Trek universe. Of particular interest to me was how this explores the events after Star Trek: Nemesis and the fall of Praetor Shinzon. Captain Janeway's actions destroying the Borg's transwarp hub in Endgame have lead the Borg to reevaluate the Federation and conclude that it is too large of a threat and must be completely destroyed, rather than assimilated. They send a massive fleet of thousands of cubes to destroy every Federation planet.

Amidst this backdrop, the novel delves into the psyche of many major characters, including Captain Jean-Luc Picard. Jean-Luc and Beverly Crusher have recently been married, Picard having finally decided to step out of his self-imposed emotional isolation. Mack explores the continuing effect of the deaths of Robert and René, his brother and nephew, years earlier. This traumatic event forced Picard to begin re-evaluating his relationships and his deep feelings for Beverly. Distraught and drowning in dispair of the inescapable nature of the Borg invasion, Jean-Luc begins to lose hope for the future. Beverly finds him on the holodeck, walking through his family's vineyard in France, and stopping to contemplate the ruins of his family home, and the memory of Robert and René. Mack's vivid imagery of Picard continues as he finds himself sitting on the floor of his (and Beverly's) quarters, clutching his Ressikan flute in his hands. I felt the scenes in episodes after The Inner Light which portrayed Picard's relationship to his flute to be some of the most powerful revelations of his character, and how much emotion and significance living that other life meant to him. Mack fleshes this out further, tying the emotional scares of his assimilation in as well.

Destiny also explores the relationship between Will Riker and Deanna Troi, having now been married and living aboard the Titan, Riker's own command. They have been struggling to start a family, the stress of which has driven them apart. Throughout the series, Mack reveals how incredibly deep their Imzadi bond truly is. Riker also struggles with intertwining his personal life and his command, while living with the consequences of impossible choices.

Worf, now the first officer of the Enterprise, continues to struggle with the loss of his wife, Jadzia. This plays out as he is forced to confront his feelings by Ezri Dax, who perhaps knows him best. The reader also sees Ezri emerge a leader, captain of the Aventine, wise beyond her years.

Surprisingly, Mack elevates the significance of Columbia NX-02, the sister ship to Enterprise, and in particular its captain, Erika Hernandez. Her character comes to life as the ever-curious scientist and explorer, which embodies the foundational message of the Federation and Star Trek in general. Her destiny pushes her into the midst of the conflict and towards a shocking revelation.

Star Trek Destiny reaffirmed the importance of the depth of characters, and David Mack did not disappoint in continuing to deepen and enhance these and many others. This book series provides a satisfying conclusion to the events of The Next Generation and Voyager, and an inner look into the history and consciousness of the Borg. Weaving together a story lines from across series, time, and space, this series must be considered a jewel on the Star Trek tapestry.