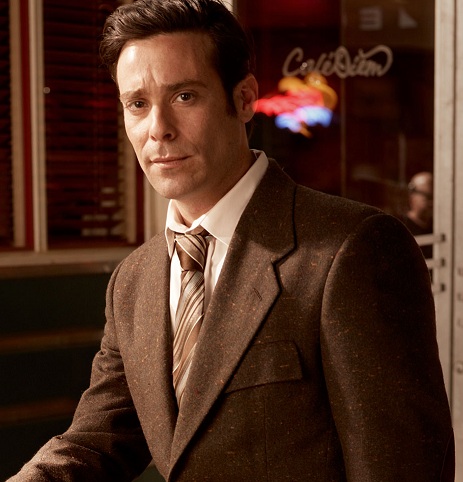 I have to admit, I wasn't very excited about the return of Eureka this season. Don't get me wrong, I think it is a great scifi show and really some of the best content on TV. I just wasn't in a rush or overly excited to start in on this new season. Well, it didn't take more than 5 minutes to pull me back in. Syfy, I sincerely hope you give this show many more seasons of episodes because the writers have really outdone themselves this time.

First off, season 4 debuts with a guest appearance by James Callis, best known as Dr. Gaius Baltar on Battlestar Galactica. Callis plays arguably the most sophisticated, complex, and conflicted personality on BSG - an acting talent he brings nicely to Eureka. He plays Dr. Grant, the founding father of Eureka and a brilliant scientist who along with Einstein created a wormhole generator.

The episode starts out with Carter, Allison, Fargo, Henry, and Jo getting sucked back in time to 1947. This is where we meet Dr. Grant. The whole episode through I just expected him to be a guest character who would be gone after they return to the future, but instead when everyone makes it home safely, they find Dr. Grant has joined them in 2010. His absence from history creates an alternate timeline, in which Jo and Zane never were together, Henry is married, Allison's son Kevin is very different, Fargo is GD Director, and Carter & Tess are still together. This creates a dichotomy: for some characters this alternate timeline is great, while for others it is a dark shadow of "home". Mixed up right in the center of this is Dr. Grant, which Callis has pulled off beautifully as a brilliant and mysterious man.

I'm very excited to see how Callis' character grows and affects Eureka, and if it ever becomes possible for them to "restore" the timeline. In my best case scenario, I think it would be good for them to continue in this timeline but have Jo and Zane start their relationship up (again) in this time. As I've said before, this show is amazing not for its "scientific" scifi but for its characters. They have been very richly developed from the very beginning, and events like Henry's relationship with Kim or Allison's relationship with Nathan Stark have really brought life to this show which is not seen elsewhere on TV. Adding this alternate reality twist along with the tremedous talent of James Callis bodes well for keeping up this tradition of incredible character development. Congrats to the writers and staff of Eureka, this is looking to be the absolute best season yet of this fantastic show!