The President Arrives on Campus 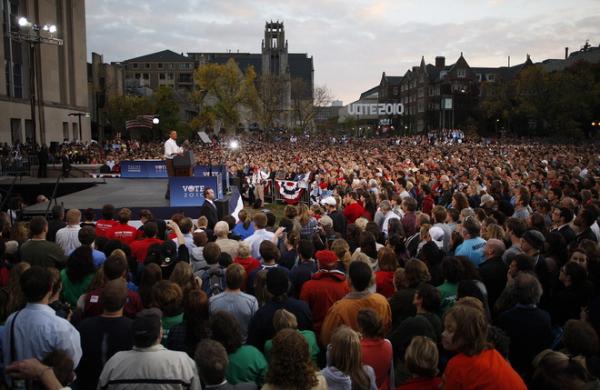 Today was a historic day for Madison and the University of Wisconsin. Barack Obama is the 3rd sitting president in history to visit the UW Campus, 60 years after Harry Truman. Students and residents packed the streets in a seemingly endless line stretching from Library Mall down Park Street, University Avenue, and beyond ending by the Nat Gymnasium. As the time drew near, the line grew to over a mile in length, 3-5 people abreast. Although I did not make it into Library Mall to see Barack in person, I eagerly watched the entire speech broadcast live. Watching and listening to Obama today reminded me of why I campaigned and voted for him 2008: he is direct and real with the public.

Yes, he made broad campaign promises. However, he qualifies those statements with the realistic expectation that these things will not be accomplished quickly but will take time. Moreover, he has said from the beginning that he will make decisions based on what he believes is right, regardless of how it affects his poll numbers. I believe he has followed through with this statement. Some of the choices he has made like bailing out Wall Street, the relatively slow timetable for withdrawal som Iraq, or the compromises on healthcare reform have not been popular with his Democratic base and are probably largely to blame for his lower poll numbers. He made those decisions anyway, and clearly accepts responsibility; holding himself personally accountable. This is why I believe Barack Obama is a great president - his personal transparency. He is frank and honest about challenges, failures, and setbacks. The feeling of having a leader you can trust to be straight with you has been a foreign concept to this nation for many years and is a welcome change. That is change we can believe in.

[Intro image thanks to JSOnline]