Perhaps Obama Has Outsmarted Us All 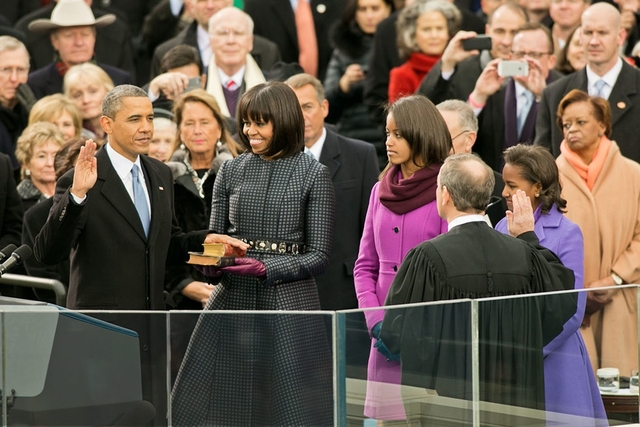 In January 2009, Americans felt hope and promise at the dawn of a new era: the first African American was sworn in as president and he offered a different view of the world - one of hope and change. Steeped in historical significance, this event was marred by the constant reminder of an economy in the midst of severe recession. Progressives were hopeful that Obama would work to enact changes important to them, such as a single-payer healthcare system, meaningful climate change reform, equal rights, workers rights, peace rather than war, and immigration reform. Many of these hopes would not see fruition in Obama's first term. Moreover, he would disappoint his progressive base and come to be viewed as a centrist. Many of his policies could be considered conservative by standards 30-40 years ago: he didn't push for single payer, he hasn't ended the wars fast enough, he hasn't done much on climate change. After watching his inauguration speech today, I am hopeful that President Obama has outsmarted us all.

Perhaps Barack Obama realized that he could not immediately enact progressive ideas amidst a great economic crisis and as the country transitioned to the first Democratic president (and first African American) in eight years. He could have seen that the country needed a more centrist leader to pull people together and raise the country out of economic recession. During this time, he worked to subtly to lay the groundwork to transform the country. Perhaps he realized that staking out "liberal" positions on topics like healthcare and fiscal reform would alienate Independents, stall recovery, and sabotage chances at a second term. A single term would cement the idea of his presidency as a fluke; an error; an inaccurate reflection of American values. Two terms does the exact opposite: it establishes his values as the face of America, since they chose him not on the promise of what he could do, but also on the outcomes of his actions. Taking the first four years to show his fellow citizens his character and calm, reasonable approach to problems allowed him to build support and at the same time start to steer public opinion (reflected in the recent Wall Street Journal poll that finds 75% of Americans like Obama personally). Moreover, it allowed him to expose the gridlock and "just say no" attitude leading Congress, and begin pushing past this unproductive form of politics. I don't think the sudden uptick in support for marriage equality can be directly attributed to Obama, but it does indicate a shift in the tone of the electorate, perhaps a shift that he had foreseen on the horizon.

Now that America has begun healing, not just economically but also as a people in our values, more ambitious work can begin. These past four years have been about building support for what he has proposed today: equal rights for all citizens, immigration reform, meaningful climate change action, gun control reform, an end to endless war, and the affirmation of Social Security, Medicare, and Medicaid not as hand-outs for takers, but as the commonwealth that allows us to help our fellow citizens and maintain a base standard quality of life. This is a smarter version of Obama, who has four years of experience and foundation to help bring these ideas to fruition.

Obama did not address other issues on which he had fallen short during his first term, such as upholding infringements into the rights of American citizens through the Patriot Act and warrant-less wiretapping, but the clear message in his inauguration speech today leaves me hopeful that the next four years will yield meaningful, progressive change for the United States.