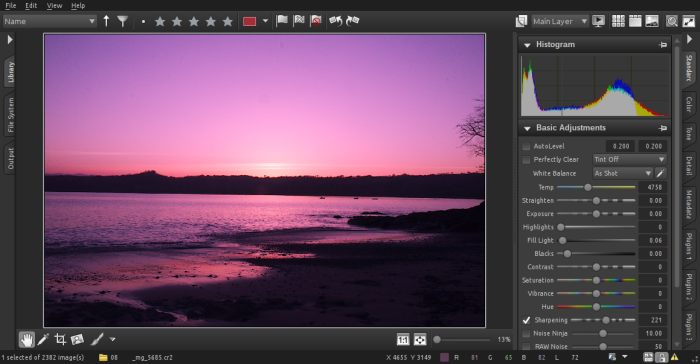 I use AfterShot Pro on Linux and also have Adobe Photoshop installed in a WINE prefix. I've been working on improving my photo processing workflow and realized that I would like to have tighter integration between ASP and Photoshop. Typically I can do all of my RAW post-processing in ASP, but some photos require additional modifications that are more suited to Photoshop (e.g layer masks). In some cases, simply exporting as a TIFF and importing into Photoshop is acceptable, however other times it would be nice to make some modifications in Photoshop and then go back and adjust the RAW settings. If you use Lightroom and Photoshop, I believe you can do this with Smart Objects. The asp2ps.sh script I wrote allows you to get similar functionality with AfterShot Pro and Photoshop.

asp2ps.sh lets you directly pass a photo from ASP to Photoshop via ASP's "open in external editor" feature. It allows you to import the photo into Photoshop as either a RAW file (which will open it in Adobe Camera RAW) or as a TIFF. If you open as a RAW, you also have the option of importing some of the XMP data from ASP into Adobe Camera RAW (asp2ps.sh handles converting the ASP values to the ACR scale, linearly). Note that since the RAW processing engines in ASP and Adobe Camera RAW are different, this most likely won't look like a 1:1 translation, but at least you will have an easy reference to which of the options you had adjusted and can re-adjust them in Adobe Camera RAW.

I hope others will also find this useful for their photo workflows!